Ok so first off. My daughter did these drawings for me and she is amazing. Thank you Emily. If you need an illustrator I highly recommend her. Just comment below and I’m happy to get you in touch. The gryphon is N’khum and the gnome is Jax. The tomb is in the Angels chapter. 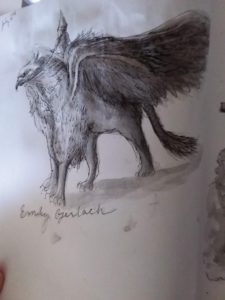 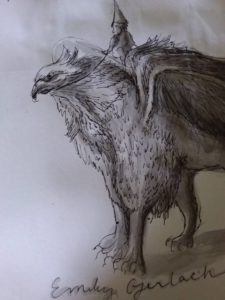 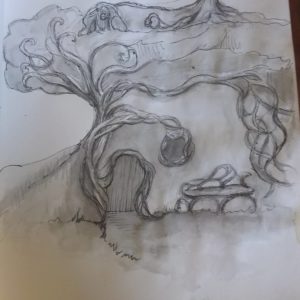 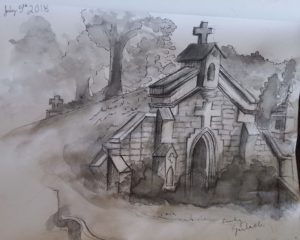 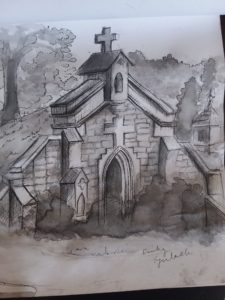 I have a thing I started doing years ago. I started noticing the truth I stumble upon each day. I try to journal this stuff, in a bound journal. I have dozens. But I don’t always get to write them down. I’ve been working on this edit and shaping my series for a year now and thought it might be a good time to reflect on some of these.

I think one of the first ones was “Editing is where books go to die.”

Someone said that to me early on and it set off alarm bells. Not because I’m afraid of the process. I just sort of recognized it as true. For a pantser, editing means adding in the structure you didn’t have before. It means a lot of deep thinking and problem solving. It means planning and above all it means rewriting. While I’m now, a year later, in possession of a series outline and in the process of outlining Sorrowfish, with about 10 chapters of book two written….it feels like I’ll never be done. Really. I’m super impatient too.

It’s very tempting to rush through this or want to give up. Or both. It doesn’t help that my full story is complicated, with three main characters. There were 118 named characters in my first draft. Yeah. Can you tell Robert Jordan inspired me? So yeah. It’s going to take a while to edit.

This week we made the decision to differentiate between the faisant and fae. Faisant are people from earth, artists or creatives (Tesla was one) who are bound to a Majister and become Faisant. These beings visit Canard in their dreams and if bound by a dewin, undergo a transformation that affects their abilities as well as changing the abilities of the dewin they serve. The binding process makes a dewin a Majister. So Sorrowfish is about this process, and about two people who go through it. But getting to that idea took a lot of time. I knew what I meant but hadn’t even really verbally expressed it to myself. My editor had to pull it out of me.

Grateful doesn’t cover it. I can’t do this on my own.

I’ve learned I absolutely cannot self-edit. That would be like self open heart surgery. Bad idea.

I’ve learned about stakes and how to define them.

I’ve learned how much was in my head, but not on the page. Too much.

I’ve figured out that I do want to self publish. Huge decision! I’m soaking up as much as I can from Mark Dawson about it.

I have studied a lot on what Tolkien actually did in his world building and learned a lot too about his process. He and Lewis are likely the two who I’ve studied most. I want to do what they did. So I need to understand them. I’ve also spent a lot of time studying literary alchemy.

The most interesting thing I think I learned about Tolkien is that his idea of creation affected all his writing. God can speak and create, forming perfectly what He intends with no limits between his vision or idea and the final product. We men are not able to do this. We must toil in a process and even then may not reach our vision. Elves had the ability to more accurately craft with less pain. That was their magic. That idea has hit me like a ton of bricks. That’s what a fae gains from becoming faisant, the ability to more quickly and accurately realize their vision. It’s a superpower. Anyone who has fought through an art form to create something will understand, I hope.

From Lewis I’ve pulled the entire concept of Chymaera (the gryphons in this story), but I didn’t know that when I started. It’s this passage from The Weight of Glory that did it.

People often think of Christian morality as a kind of bargain in which God says “If you keep a lot of rules I’ll reward you, and if you don’t I’ll do the other thing.” I do not think this is the best way of looking at it. I would much rather say that every time you make a choice you are turning a central part of you, the part of you that chooses, into something a little different from what it was before. And taking your life as a whole, with all your innumerable choices, all your life long you are turning this central thing either into a heavenly creature or into a hellish creature: either into a creature in harmony with God and with other creatures, and with itself, or else into one that is in a state of war and hatred with God, and with its fellow-creatures, and with itself. To be the one kind of creature is heaven: that is it is joy and peace and knowledge and power. To be the other means madness, horrow,idiocy, rage, impotence and eternal loneliness. Each of us at each moment is progressing into one state or the other.

Right now I’m looking at both Dickens (Scrooge) and Madeleine L’Engle, studying some of their scene structures for the ritual of the binding.

Anyhow, a lot of learning. Let’s hope it results in what I want for the final products. You never know.

“What really happens is that the story-maker proves a successful ‘sub-creator’. He makes a Secondary World which your mind can enter. Inside it, what he relates is ‘true’: it accords with the laws of that world. You therefore believe it, while you are, as it were, inside. The moment disbelief arises, the spell is broken; the magic, or rather art, has failed. You are then out in the Primary World again, looking at the little abortive Secondary World from outside.”