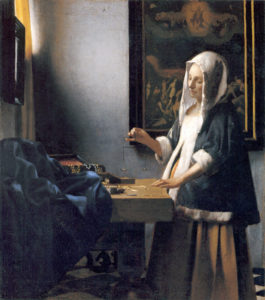 My daughter read several chapters of my book and complained loud and long. She knows I’m an advocate for lightjoy. I don’t like grimdark. But she said my book is dark, so dark. I think she’s right. It is dark in many places, many of them very unpleasant. But it made me think about what I mean by lightjoy.

I’m a designer. In design, you must have fundamental elements in order to have the correct (intended) response to your work.

Because I’m a designer, I see writing with this lens.

I likely need to write a series on how I see these elements working in prose. Poetry is a whole other animal, and one that most would consider when thinking about these elements.

All of that to mention one element in particular: contrast.

Contrast happens when you juxtapose opposites and then place them close to one another in some way. In my own work, the darkness serves as the medium to display the light. To make it shine more brightly, if you will. What’s that saying? It’s always darkest before the dawn? There’s a reason for that. Without it there is no tension, stakes or really any story. I’m having to work really hard to make sure there’s enough in there. I know I need it. Believe me, I’d much rather write about gnome antics.

So why do I object to grimdark?

I may be wrong, but some of it feels to me like an exploration of darkness for darkness’s sake. Shock value. No one has gone this far before! So let’s milk the plotlines of incest and child murder in fantasy fiction. Or drug abuse! Yeah. Think outside the box.

It works, unfortunately. People will be attracted to violence and lurid sex. Human nature of the basest sort will always reward such. Is it necessary to plumb those depths though? Really? Is the light which you portray in the story equal or better? No?

Then it isn’t contrast, to me. It misses the mark. It’s cheap. There is so much desensitivity to pain in our society that in some cases, authors have gone to extremes to get an emotional reaction. It takes much less work to shock than than to draw a reader into a relationship with a character and let them develop empathy. Lesser writers skip that bit altogether. Masters do both. Then grimdark masters leave people hanging, on a down note or with a negative theme.

That doesn’t mean that a person shouldn’t use darkness at all. Frodo’s journey into Mordor, while not my favorite part of the book, was necessary. Same for Gandalf’s fall in Moria.

But the light outshone the darkness, overcame it. That was the point.That, to me is the essence of lightjoy. Hope. I’ve personally had my fill of “grit,” thank you very much. You can keep that. It’s not my thing.

I can’t have the contrast without the darkness but hopefully, we will move  in my story from dark to light more and more. I like to think too that there is enough joy there that people can see and look forward to what is coming. So yes, I understand my daughter’s objections. For me, the satisfying part of a good book is not the absence of sorrow, it is the triumph in spite of it. And Sorrowfish is many things, but most of all, my goal is for it to be that kind of story.

If you want to see repetition put to work in prose read my short story here.

2 thoughts on “Contrast in Fiction”

“Even in literature and art, no man who bothers about originality will ever be original: whereas if you simply try to tell the truth (without caring twopence how often it has been told before) you will, nine times out of ten, become original without ever having noticed it.”