I’m trying to sort through the different methods I’ve seen of dealing with political structures in epic fantasy. A big part of me is tempted to shirk my duty to develop this thoroughly, making up what I need and leaving the rest.

I have four books to write. That’s a stupid-cop out that will cost me in the long run. That and I’m sure it will get changed a lot as I go along.

So far I’ve been studying Charlemagne rather a lot. I’m getting ready to dive into ancient Wales. There isn’t a lot known, but they actually had a bardic tradition and I’m curious. After all, King Arthur came from Wales.  But here’s the issue I have with looking into all of this.

I honestly hate politics in fantasy. If I could, I’d avoid the topic altogether. I can’t because it’s part of the framework, required to tell my story. The truth is, all stories have some tiny degree of politics, whether it’s which child the parent favors or House of Cards. Politics – the word is a fancy term for the relationships between people and the rules under which they operate, implicit or implied.

The task cannot be shirked. But I can avoid it for a little while with copious research that’s really a disguise for procrastination.

(That was a confession)

Good references on types of governments:

The best practical tips from this episode were:
“Start with personal freedoms and how they affect the characters.”

“Come up with jobs/offices and give them original names.”

But I’ll follow my worldbuilder Leviathan in Scrivener to deal with the government.  It’s here:

The World-building Leviathan and a Scrivener template

My difficulty of course is that the pantser in me sees all of this like she sees outlining and basically looks at me, smug. She shakes her head and points to the screen and tells me, “you’re going to have to write it to know.”

and I just feel anxious. The way I really, actually work is that I go ahead and write and then fill this all in as I know what is what.

I do have a plan for my intrigue though.

Given my personal definition of politics and my hatred of the entire subject, I’m going to make…a crime board. I’m going to start with what I know and literally put in my threads until I grasp the shape of this part of my world’s reality. I think that’s the only way this will get done, for me. 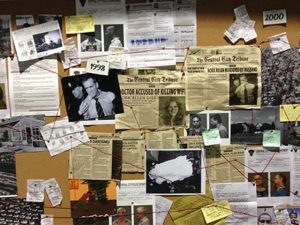 I have to locate a corkboard, index cards, post-its and thread. I’ll make a card for each character I know of, post-its in one color for all existing facts, another for goals.

Anyhow, that’s the plan of attack. I’ll let you know how it goes.

How have you approached this?

“Poets find truth by writing about what they love.”